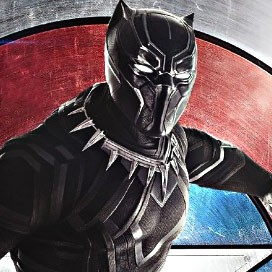 Forced into action after another Avengers public disaster, T'Challa is a Wakandan prince whose royal family heirlooms includes a wicked cat suit of vibranium (the same stuff Cap's shield is made of). This is T'Challa's first live-action movie appearance, to be followed up with his own standalone Black Panther movie in 2017.