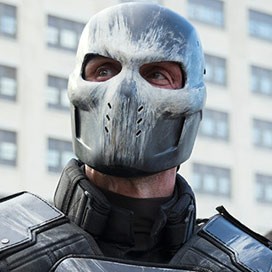 In a previous life, Brock Rumlow was a company man, head of one of S.H.I.E.L.D.'s STRIKE teams, executing ground counter-terrorist missions. The rub? He himself was a terrorist, a double agent embedded deep by evil syndicate HYDRA. But that all changed when Captain America arrived on scene, with Cap routinely drubbing Rumlow. In the end, he got run over by a Helicarrier. Burned and disfigured but now sporting sweet-intimidating armor, Rumlow has christened himself Crossbones, the mercenary whose actions in Civil War's opening directly sets the plot into motion.