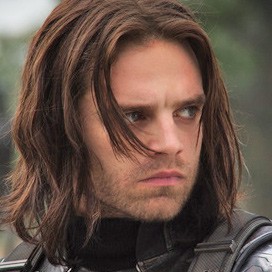 Reunited and it feels so good... With a friendship that has withstood brainwashing, suspended animation, and donnybrooks on exploding trillion-dollar aircrafts, Bucky is back and on side with old pal Steve "Captain America" Rogers. The two began as soldiers in World War II who fought for glory before meeting separate, seemingly fatal ends. But through the power of science and fantasy, Bucky has been kept alive by HYDRA, groomed into a stoic modern day assassin known as The Winter Soldier. He's seemingly able to pull from HYDRA's mental fangs by saving Cap's life, after trying numerous times to end it. The last we saw of Bucky, he had vanished into the woods, probably in search of a good therapist.