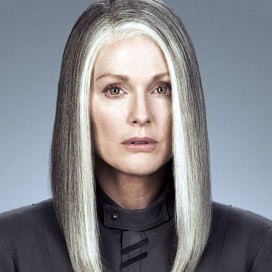 Alma Coin is the leader of District 13 and she's not exactly an easygoing president. Her people are largely military, and they lost many of their children in a plague. Coin lost her own husband and daughter. She's willing to use Katniss to further the revolution, though she concedes when it's necessary for the cause, as she does when Katniss insists on pardons for the freed victors. She may not let another one go by in the coming days of the battle, though.