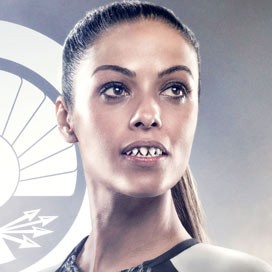 Enobaria is a former victor from District 2 who is famous for ripping someone's throat out with her teeth, which she later had filed down to points. She and Katniss don't get along, but when she's picked up by the Capitol, Katniss demands her release as well. We know she has been rescued as actress Meta Golding is appearing in the final film of the series. We don't yet know what part she'll play.