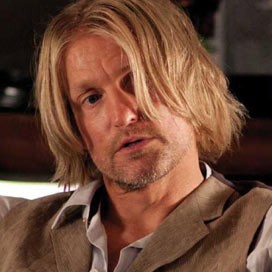 The hard-drinking former Hunger Games victor and mentor to fellow District 12 contestants Katniss and Peeta, Haymitch has been working to take down the Capitol with some of the contestants and Plutarch Heavensbee for some time -- but didn't tell Katniss she was part of the plan. He's not her biggest fan, but even suffering from alcohol withdrawal in District 13, he's there for her when she falls apart. He's found a place for himself as a continued mentor for Katniss now that she's the Mockingjay. He has also revealed that after winning the Games himself, his mother, younger brother, and girlfriend were killed by President Snow.