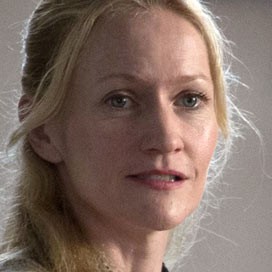 Katniss' mother is never named in the book, but she's mentioned quite a lot. She was devastated by the death of her husband in the mines of District 12 and became something of a ghost, leaving Katniss to take care of the family. She seems to snap out of it when Katniss volunteers as tribute in her sister's place and by the time they get to District 13, she's working as a healer alongside her daughter Prim.