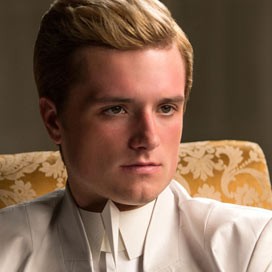 Poor Peeta doesn't escape the arena after Beetee's plan goes sideways. He is separated from his beloved Katniss, and taken prisoner by President Snow. Repeatedly tortured and used in a series of propaganda videos for the Capitol, many with TV host Caesar Flickman, he sends public ceasefire messages and begs the rebellion to lay down their weapons. Meanwhile, he's being conditioned through torture and hallucinatory tracker jacker venom to associate memories of Katniss with pain. When Beetee manages to get the video of the genocide in Peeta's former home, District 12, through during one of the propaganda interviews, he gets a message to District 13, warning of an attack. After he's rescued from the Capitol, he attacks Katniss. He may never be able to associate her with anything but pain, which may lead to her death.