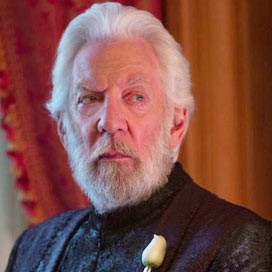 President Snow has been ruling the Districts and the Capitol with an iron fist for years, but after the last Hunger Games debacle, he's losing control. That thorn in his side, otherwise known as Katniss Everdeen, is stirring the Districts to rebellion. Snow has an ace in the hole, however, as he holds Peeta and many of the other victors hostage in the Capitol. He uses Peeta as propaganda, having him hijacked" with torture and tracker jacker venom. He allows a rescue mission to get the victors, knowing that it may cause Katniss' death. It is also revealed by Finnick that Snow has sold the victors of the Hunger Games as sex slaves to the highest bidder and that he has also poisoned his rivals -- but now bears the effects of some of that poison with a constantly bleeding mouth.