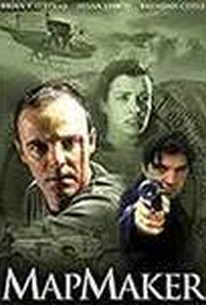 In director Johnny Gogan's deliberately paced political thriller Mapmaker, an outsider in a small Northern Irish village finds himself embroiled in a old conflict between the IRA and the local forestry department. Hired by the Northern Ireland parish of Rosveagh to prepare a tourism map, cartographer Richie Markey (Brian F. O'Byrne) sets about his task, only to find some archeological sites are in danger of being destroyed. Raising his concerns with forestry manager Robert Bates (Brendan Coyle), Markey quickly suspects something sinister lies behind the destruction when Bates brusquely ignores his pleas. Shortly thereafter, Markey learns that a previous survey team failed in mapping the region when one of its members, one Peter Nolan, disappeared after being accused of informing on a couple of IRA men that were killed in connection to a soldier's death. Despite receiving warnings to stop his work, Markey carries on until he discovers Nolan's body and comes to the rather startling conclusion that his completed map may very well solve the mystery surrounding Nolan's death. ~ Ryan Shriver, Rovi

There are no critic reviews yet for Mapmaker. Keep checking Rotten Tomatoes for updates!

There are no featured audience reviews for Mapmaker at this time.