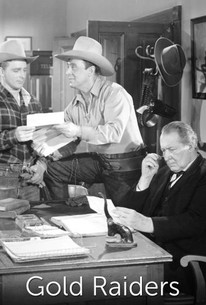 Filmed in a record five days, Gold Raiders was an attempt by producer Jack Schwartz to inaugurate a new western series starring old favorite George O'Brien. Adding novelty value to the proceedings are the Three Stooges: Shemp Howard, Larry Howard and Moe Howard. The action is fairly divided between O'Brien, who plays a frontier insurance investigator, and the Stooges, cast as itinerant snake-oil peddlers. The star and his comedian cohorts team up to squash a gang of thieves who've been hijacking gold-mine shipments. It is no surprise to anyone that the villain is local bigwig Sawyer (Lyle Talbot), but the plot does manage to sneak in quite a few interesting twists, including a red-herring character who turns out to be a spy for the baddies, and then turns out to be working for the good guys! For all their buffoonery, the Stooges perform heroically during the climactic shootout (even Larry)! Sheila Ryan co-stars as the granddaughter of bibulous doctor Clem Bevans, while Monte Blue enjoys a larger part than usual as the local mine owner. Gold Raiders was reissued in a shortened version (shorter even than its original 56-minute running time!) as The Three Stooges Go West.

George O'Brien
as Himself

There are no featured audience reviews for Gold Raiders at this time.