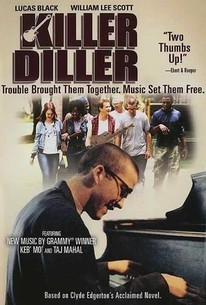 Arrested for violating his parole, guitar playing car thief Wesley Benfield (William Lee Scott, The Butterfly Effect, Identity) is sentenced to a halfway house in the middle of the Bible belt. Ned Sears (Fred Willard), who runs the house, is an eccentric zealot currently forming his own hymn playing band and recruits young felons based on their musical talents. Wesley and the motley assembly of lawbreakers are confined and condemned to playing "church music" to retirees and grade schoolers. Then Wesley meets Vernon (Lucas Black, Sling Blade, All the Pretty Horses, Cold Mountain), an autistic savant whose rocking blues piano playing electrifies them all. Vernon provides the band with the spark it needs, and together, with singer Shanita Scott (Niki Crawford), they form the red hot Killer Diller Blues Band. Now all they have to do is break the law one more time. Killer Diller writer-director Tricia Brock returns to the Missouri riverbanks of her youth with this fierce and funny adaptation of Clyde Edgerton's highly praised novel of the same name. Blues legend Taj Mahal opens the film and the score features Grammy winner Keb Mo'. The film also stars Mary Kay Place, John Michael Higgins and W. Earl Brown.--© Official Site