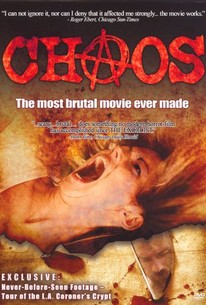 Two young women, Angelica (Chantal Degroat), who has returned home for the summer from UCLA, and Emily (Maya Barovich) go off to a rave in the woods, where Angelica hopes to score some ecstasy. There, they meet Swan (Sage Stallone, horror aficionado and son of actor Sylvester Stallone), who, unbeknownst to them, was sent to find two naïve young women and bring them back to his father, Chaos (Kevin Gage), and his depraved cohorts, Frankie (Stephen Wozniak) and Daisy (Kelly K.C. Quann). As the helpless girls are brought into the woods to be tortured and murdered, Emily's loving parents grow worried that their normally levelheaded daughter has missed her curfew and is not answering her cell phone. After a frustrating encounter with the local police, they decide to go and look for the girls themselves. Chaos, written and directed by David DeFalco, is clearly modeled after Wes Craven's seminal 1972 low-budget horror film, Last House on the Left, which was inspired by Ingmar Bergman's The Virgin Spring.

Chantal Degroat
as Angelica
View All

"Last House" is Next Remake
View All

There are no featured audience reviews for Chaos at this time.