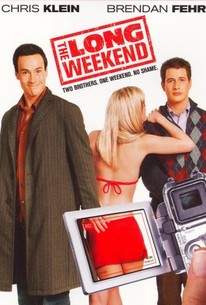 An advertising executive at risk of losing his job finds that inspiration can sometimes come from the least likely of places in a brotherly comedy about getting laid and getting the job done from director Pat Holden. Adman Ed Waxman (Brendan Fehr) has just been informed by the higher-ups that if he doesn't come up with a killer campaign in the next 48 hours, he can kiss his high-paying job goodbye. Though work is all Ed can think about as the weekend approaches and inspiration seems to take a vacation, the arrival of Ed's womanizing brother, Cooper (Chris Klein), finds the pair setting out on an altogether different mission: to find the overworked and undersexed Ed some fitting female companionship. Just as a series of disastrous encounters with everyone from single mothers to sultry strippers begins to convince Ed that his love life is in as much trouble as his professional life, the appearance of a woman who could quite possibly be Ed's soul mate provides a glimmer of hope that the situation may not be as dire as he previously thought.

Kristi Angus
as Attractive Woman No.2

Ildiko Ferenczi
as Stripper No.1

Jennifer Walther
as Stripper No.2

Holly Eglington
as Stripper No.3

Jordana Frost
as Stripper No.4

Erica Cerra
as Attractive Woman No.1

J. Douglas Stewart
as Doctor No.2

Charles Payne
as Cop No.1

Michael Daingerfield
as Cop No.3

Critic Reviews for The Long Weekend

Audience Reviews for The Long Weekend