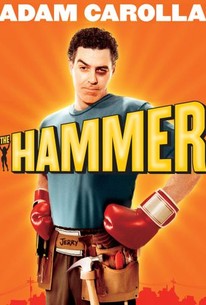 The Hammer perseveres as both an above-average sports comedy and a perfect starring vehicle for Carolla.

Can a guy edging into middle age become a success fighting guys half his age? That's the big question behind this independent comedy. Jerry Ferro (Adam Carolla) is almost 40 years old, and he's spent most of his life going nowhere -- and taking his own sweet time getting there. While Jerry enjoyed some success as an amateur boxer when he was young, these days he's out of shape, drinks too much, and scrapes by working in construction. Through his work as a handyman, Jerry has landed a part-time job teaching boxing at a gym in Pasadena, though none of his students are likely to ever move beyond sparring as a hobby. One day, one of Jerry's old friends, Eddie Bell (Tom Quinn), stops by the gym with a promising new fighter he's training. Since he's short on sparring partners, Eddie asks Jerry to step into the ring with the young boxer, and while it's clear that Jerry is in lousy shape and out of practice, he also manages to knock out the challenger with one well-placed punch. Eddie is convinced Jerry still has what it takes, and offers to help Jerry make a comeback, confident that despite his age he can land him a spot on the U.S. Olympic Boxing Team. Also starring Heather Juergensen, The Hammer received its world premiere at the 2007 Tribeca Film Festival.

Keeshan Giles
as Posse No.1

Lorenzo Eduardo
as Posse No.2

Eddie Fernandez
as LeMat Crew No.2

News & Interviews for The Hammer

Critic Reviews for The Hammer

Audience Reviews for The Hammer