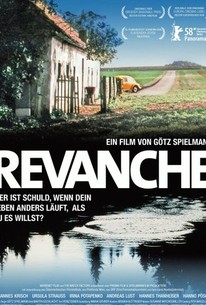 With Revanche, Götz Spielmann has crafted a debut as surprising as it is suspenseful.

A happily married couple becomes unlikely friends with a man whose life has been marked by chaos and violence in this drama from Austria. Alex (Johannes Krisch) is a small-time criminal who, after a stretch in prison, finds himself working for Konecny (Hanno Pöschl), who runs a grimy house of prostitution; unknown to Konecny, Alex is also involved with Tamara (Irina Potapenko), one of his whores. Wanting to raise some quick cash, Alex robs a bank in a nearby small town and hides out on a farm owned by his grandfather (Hannes Thanheiser) while he waits for the heat to cool down. Alex tries to keep a low profile in the country, and he's troubled by boredom and despair, but his mood brightens when he strikes up a friendship with Susanne (Ursula Strauss), a cheerful and generous woman who lives nearby. But Alex's new friend happens to be married to Robert (Andreas Lust), a member of the local police force. Revanche was screened as an official entry at the 2008 Berlin Film Festival.