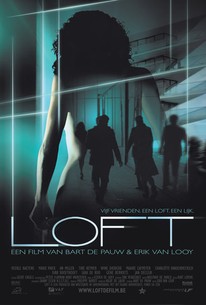 Five men share a secret that has deadly consequences in this thriller from Belgium. When Filip (Matthias Schoenaerts), a playboy with a wild streak, finally settles down and gets married, his good friend Vincent (Filip Peeters) presents him and three of his friends with a special gift. Vincent is an architect, and after supervising the renovation of a apartment block, he installed a luxurious penthouse flat for the use of himself and his married pals, where they can enjoy liaisons with other women without their spouses becoming any the wiser. Filip, Vincent and three of their buddies -- hard-drinking ladies' man Marnix (Koen de Graeve), Filip's psychoanalyst brother Chris (Koen De Bauw) and taciturn Luc (Bruno Vanden Broecke) -- are the only ones with keys to the flat, and the only ones who are supposed to know it exists. But one day one of the five checks into the apartment and discovers a woman's bloody corpse shackled to the bed; one of their group is a murderer, but who is the killer and how can the others keep this a secret from the police and their families? Loft was directed by Erik Van Looy and written by Bart de Pauw, both of whom got their start in the film business as actors.

An Miller
as Ellen

Ann Miller
as Ellen
View All