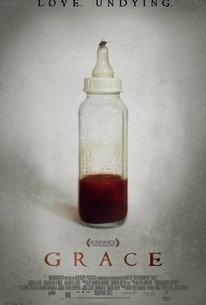 Though not entirely effective as a conventional horror flick, Grace is still a graphic, disturbing, and artful exploration of twisted maternal instinct.

One couple's dream turns into the worst nightmare imaginable when their unborn child is declared dead in utero, and the devastated mother insists on carrying the stillborn baby to term. Madeline Matheson (Jordan Ladd) is eight months pregnant. She's determined to have a healthy child, and as such, she's adapted a pure-body lifestyle and decided to have a natural childbirth. Though her outspoken mother-in-law is adamant that Madeline receive standard hospital care during the delivery, the expectant mother has instead opted for the caring companionship of an experienced midwife. When the unborn baby is fatally injured during a sudden and tragic accident, Madeline remains determined to carry her stillborn daughter to term. Later, when the child is delivered, Madeline miraculously wills the tiny corpse to life. In the aftermath of the devastating experience, Madeline grows increasingly isolated from her family and friends, gradually realizing that something is terribly wrong with little baby Grace. Now, if Madeline hopes to keep Grace alive, she will be forced to make a series of dreadful sacrifices. ~ Jason Buchanan, Rovi