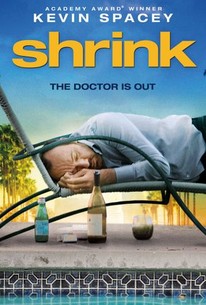 Kevin Spacey's performance is almost sharp enough to save this Hollywood dramedy from itself, but in the end, he's dragged down by a cliched script and indifferent direction.

What happens when the people we count on to hold us together are barely holding it together themselves? Jonas Pate's Shrink is a striking, fast-paced exposé of the "other" Hollywood, featuring folks living outside their comfort zone and the people who put them there.Henry Carter is a psychiatrist with an A-list clientele, including a once-famous actress, an insecure young writer, and a comically obsessive-compulsive super-agent. Henry is not in a good place, however. He has been asked to take his first pro bono case, a troubled teenage girl from a neighborhood far from the Hollywood hills. Considering his present state of mind, is he ready for the real-life troubles of a young woman who loves the world of movies he has become so jaded by? At its core, Shrink is a study of control and our endless need for it, even when it grows increasingly impossible to obtain. Writer Thomas Moffett uses classic archetypes in this modern Hollywood tale, but never pushes them over the edge of credibility. Performed by a well-matched cast at the top of their form, the result is both satisfying and exhilarating. Watching Shrink makes us feel like voyeurs looking through a window into the lives of people who look great, feel worse, and end up behaving badly.