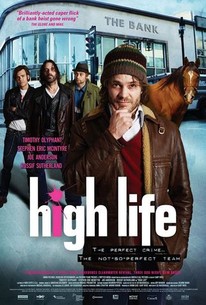 High Life is as visually arresting as it is challenging, confounding, and ultimately rewarding - which is to say it's everything film fans expect from director Claire Denis.

A handful of drug-addicted petty criminals discover their plan to pull off the perfect crime isn't quite perfect at all in this dark fusion of comedy and action from director Gary Yates. It's 1983, and Bug (Stephen Eric McIntyre) has just been released from prison. Bug meets up with his friend and former cellmate Dick (Timothy Olyphant), who is working as part of the cleaning crew at a hospital; it's Dick's first on-the-books job, and it provides him with a steady paycheck as well as an opportunity to steal drugs to feed his appetite for opiates. Thanks to Bug, Dick is quickly fired, but Bug soon gets an idea for a quick and lucrative score. Automated Teller Machines have become a common item while Bug was in stir, and he hatches a clever plot to rob a bank's ATM machines by posing as repairmen. Dick thinks Bug's scheme can actually work, and they recruit two guys to help pull the job, small-time thief Donnie (Joe Anderson) and Billy (Rossif Sutherland), a fellow junkie Dick meets at a twelve-step meeting. However good the plan looked on paper, once Dick and Bug meet up with Donnie and Billy to pull the job, it becomes obvious things aren't panning out and their partners in crime are even less dependable than they are. High Life was based on the play of the same name by Lee MacDougall, who also wrote the screenplay for the film.