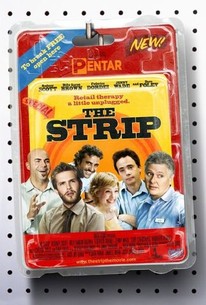 The five employees of a struggling electronics store situated in a typical strip mall struggle to balance their big ambitions with their growing feelings of inadequacy in this comedy from writer/director Jameel Khan. Glenn (Dave Foley) takes his job at Electri-city very seriously, to the point that lately he's been neglecting his wife. When Glenn becomes obsessed with the pretty manager of another store in the strip mall, his career and his home life begin to suffer. Meanwhile, Kyle isn't sure he wants to be the one to take over the chain, even though his father is eager to see him become a successful businessman. As a result, Kyle remains hopelessly stuck in a state of arrested adolescence, unable to carve out his own life path but unwilling to let down his unintentionally overbearing father. Former high school basketball player Rick is just working at the store temporarily -- or at least that's what he keeps telling himself. He wants to find fame as an actor, but it just isn't working out. As ambitious immigrant Avi prepares for his arranged marriage, his first glimpse of his gorgeous bride-to-be proves a substantial shot to his confidence. How can such a lovely woman find anything worthwhile in a lowly electronics store employee? Last, but certainly not least, is Jeff. Rendered homeless after his girlfriend walks out on him, Jeff moves in with Glenn temporarily, complicating Glenn's already tenuous relationship with his lonely wife. Every one of the employees at Electri-city has an idea of where they'd like to be in life, and they're all about to discover that sometimes where you want to be and where you need to be don't always match up.

News & Interviews for The Strip

Critic Reviews for The Strip

Audience Reviews for The Strip

There are no featured audience reviews for The Strip at this time.