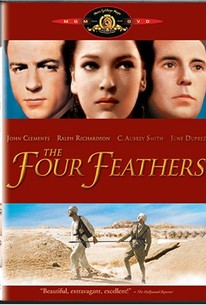 This was the first sound production of A.E.W. Mason's classic adventure novel, which was brought to the screen three times in the silent era. Harry Faversham (John Clements) is the son of a military man who expects his son to follow in his footsteps on the fields of battle. Gen. Burroughs (C. Aubrey Smith), the father of Faversham's sweetheart, Ethne (June Duprez), was also a hero in the Crimean War, and he often regales Harry with tales of his exploits under fire. However, Harry is not so sure he believes in the family's tradition of military service and resigns his commission in 1898, shortly before his company is scheduled to head into the Sudan. Three of Faversham's comrades in arms, Capt. John Durrance (Ralph Richardson), Lt. Peter Burroughs (Donald Gray), and Lt. Arthur Willoughby (Jack Allen), each present Harry with a white feather, symbolizing their belief that he is a coward; Ethne shares their belief, and gives him one as well. Disgusted with himself, Faversham disguises himself as a Sangali tribesman and travels to the Sudan so that he might be able to move behind enemy lines and serve the British forces as a scout and reconnaissance agent. When his former regiment is attacked, Faversham is able to lead Burroughs and Willoughby to safety, with the wounded Durrance not realizing that the Arab who saved his life was in fact the man that he accused of cowardice. The Four Feathers was a great critical and commercial success and received an Academy Award nomination for Best Cinematography.

Amid Taftazani
as Karaga Pasha

Clive Baxter
as Harry as Child

Critic Reviews for The Four Feathers

Audience Reviews for The Four Feathers