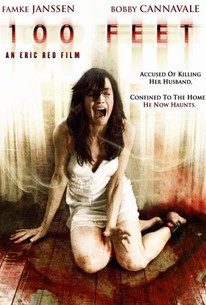 When a woman serving time for the murder of her husband is granted early release on the condition that she remains under house arrest for the remainder of her sentence, her past strikes back with a supernatural vengeance in this thriller from director Eric Red (Undertow and Bad Moon). Marnie Watson (Famke Jansen) was suffering under the brutal hand of her husband Mike (Michael Pare) - a violent New York City cop - when she struck back in self-defense. In the aftermath of that tragedy, Mike was dead and Marnie convicted of manslaughter. Now released from prison and outfitted with an electronic ankle bracelet the will alert authorities to her location at all times, Marnie is given strict orders to remain in her house until her sentence is served in full. As Marnie begins to serve her time, her late husband's partner observes from a patrol car parked across the street - eager for the moment she violates her probation and he can lock her up for good. But there's something else in the house with Marnie, and now the woman who thought her nightmare was finally over is about to discover that it's only just begun. Marnie's husband is just as evil in death as he was in life, and he's determined to strike back at the woman who killed him with savage ferocity.