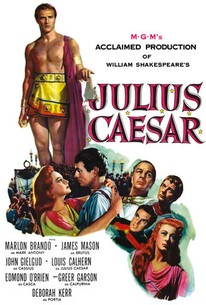 A sterling cast gives Shakespeare's tale of betrayal and reprisals body and fine form, with Marlon Brando displaying a galvanizing command over the Bard's language.

Joseph L. Mankiewicz directed this exquisite version of William Shakespeare's play. Louis Calhern is Julius Caesar, whose conquests have enabled him to rise to the status of Roman dictator. But his ascent to almost God-like status has given pause to influential members of the Roman Senate. Chief among them is Cassius (John Gielgud), who is troubled by Caesar's popularity and dictatorial status. Convinced that Caesar's assassination would be the best thing for Rome, he conspires with Casca (Edmond O'Brien) and the influential Brutus (James Mason) to plot Caesar's murder. Despite dark omens, Caesar walks confidently into the Roman Senate, where he is stabbed to death by the conspirators. His companion Marc Antony (Marlon Brando) is shocked and runs to the corpse of his beloved friend. He agrees to support Brutus while an unruly mob gathers in front of the Senate doors, having heard rumors of Caesar's assassination. Brutus convinces the mob that Caesar's death was for the good of Rome, preventing him from forming a monarchy. Then Antony appears, determined to destroy the conspirators; he delivers a speech that subtly damns the assassins. With the mob against them, the conspirators are forced to flee Rome and Antony organizes an army against them. ~ Paul Brenner, Rovi

O.Z. Whitehead
as Cinna the Poet

Chet Stratton
as Servant to Caesar

Michael Tolan
as Officer to Octavius

William Phipps
as Servant to Antony

Paul Guilfoyle
as Citizen of Rome

Lawrence Dobkin
as Citizen of Rome

David Bond
as Citizen of Rome

Jo Gilbert
as Citizen of Rome

Ann Tyrrell
as Citizen of Rome

John O'Malley
as Citizen of Rome

Oliver Blake
as Citizen of Rome

Alvin Hurwitz
as Citizen of Rome

Donald Elson
as Citizen of Rome

Stephen Roberts
as Dardanius
View All