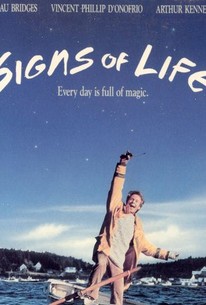 Co-produced by the folks from PBS' American Playhouse series, Signs of Life (alternate title: One For Sorrow, Two For Joy) stars veteran actor Arthur Kennedy as a cranky, set-in-his-ways Maine shipbuilder. Unable to keep apace with the 1980s, Kennedy is forced to close up shop. The film probes the various effects this decision has on Kennedy's employees. Beau Bridges has a wife (Kathy Bates) and four kids to support, with a fifth on the way. Kevin J. O'Connor would like to take a salvage-diving job in another state, but must first break off his long-standing relationship with waitress Mary Louise Parker. And Vincent D'Onofrio, who'd managed to find a job for his retarded brother Michael Lewis at Kennedy's establishment, is forced to consider having Lewis institutionalized. Though screenwriter Mark Malone isn't completely successful in avoiding the Obvious, there is much to cherish in Signs of Life. The film represented Arthur Kennedy's return before the cameras after ten years' retirement; after one additional performance in the independently produced Grandpa, Kennedy died in 1990 at the age of 76.

Will Patton
as Mr. Coughlin Sr.

Critic Reviews for Signs Of Life

Audience Reviews for Signs Of Life

There are no featured audience reviews for Signs Of Life at this time.