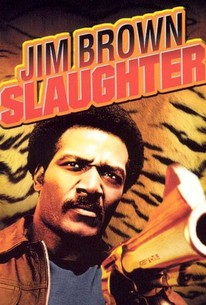 A typical gangland killing has an unusual outcome when the victim's son comes looking for justice in this violent blaxploitation action drama. Slaughter (Jim Brown) is a former Green Beret who is a decorated war hero, but while he's devoted his life to fighting for right, his father followed another path as a gangster. However, while Slaughter's dad was a career criminal, his mother played no part in his actions, and when they're both killed in a car explosion, Slaughter is determined to get revenge. Slaughter is convinced a rival crime boss ordered the bombing, and plans a daring raid where he kills the suspect. Slaughter is captured by police, and angry detective A.W. Price (Cameron Mitchell) tells Slaughter he had the right idea but the wrong man. Slaughter is persuaded to team up with undercover detectives Harry (Don Gordon) and Kim (Marlene Clark) as they travel to Puerto Rico in hopes of infiltrating the operations of hot-headed mobster Hoffo (Rip Torn). The cops have learned that Hoffo and his cronies are computerizing their operations and they're looking for hard evidence, but Slaughter is more interested in taking down Hoffo, and he'll do whatever it takes. The rivalry between Slaughter and Hoffo becomes all the more bitter when Slaughter becomes involved with Ann (Stella Stevens), the gangster's beautiful girlfriend. Featuring a dynamic theme song by Billy Preston, Slaughter was a major box-office hit in 1972 and one of the most popular films of Jim Brown's screen career; it spawned a sequel, Slaughter's Big Rip-Off, which appeared in 1973.

B. Gerardo Zepeda
as Hood

There are no featured audience reviews for Slaughter at this time.