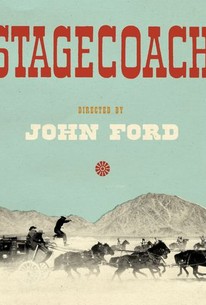 Typifying the best that the Western genre has to offer, Stagecoach is a rip-roaring adventure given dramatic heft by John Ford's dynamic direction and John Wayne's mesmerizing star turn.

Although there were Westerns before it, Stagecoach quickly became a template for all movie Westerns to come. Director John Ford combined action, drama, humor, and a set of well-drawn characters in the story of a stagecoach set to leave Tonto, New Mexico for a distant settlement in Lordsburg, with a diverse set of passengers on board. Dallas (Claire Trevor) is a woman with a scandalous past who has been driven out of town by the high-minded ladies of the community. Lucy Mallory (Louise Platt) is the wife of a cavalry officer stationed in Lordsburg, and she's determined to be with him. Hatfield (John Carradine) is a smooth-talking cardsharp who claims to be along to "protect" Lucy, although he seems to have romantic intentions. Dr. Boone (Thomas Mitchell) is a self-styled philosopher, a drunkard, and a physician who's been stripped of his license. Mr. Peacock (Donald Meek) is a slightly nervous whiskey salesman (and, not surprisingly, Dr. Boone's new best friend). Gatewood (Berton Churchill) is a crooked banker who needs to get out of town. Buck (Andy Devine) is the hayseed stage driver, and Sheriff Wilcox (George Bancroft) is along to offer protection and keep an eye peeled for the Ringo Kid (John Wayne), a well-known outlaw who has just broken out of jail. While Wilcox does find Ringo, a principled man who gives himself up without a fight, the real danger lies farther down the trail, where a band of Apaches, led by Geronimo, could attack at any time. Stagecoach offers plenty of cowboys, Indians, shootouts, and chases, aided by Yakima Canutt's remarkable stunt work and Bert Glennon's majestic photography of Ford's beloved Monument Valley. It also offers a strong screenplay by Dudley Nichols with plenty of room for the cast to show its stuff. John Wayne's performance made him a star after years as a B-Western leading man, and Thomas Mitchell won an Oscar for what could have been just another comic relief role. Thousands of films have followed Stagecoach's path, but no has ever improved on its formula.

John Wayne
as The Ringo Kid

Jack Pennick
as Jerry the Bartender

Many Mules
View All