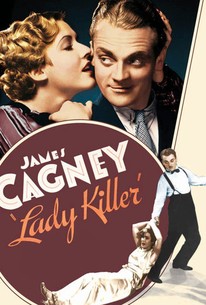 We first lay eyes on Jimmy Cagney in Lady Killer while he's working as a movie theater usher. This job lasts just long enough for Jimmy to be swindled in a "badger game" orchestrated by hard-boiled Mae Clarke and a gang of crooks headed by Douglass Dumbrille. Knowing a good thing when he sees it, Cagney joins the mob, and soon is calling the shots. But though he's got larceny in his soul, Cagney draws the line at murder, and when gang member Raymond Hatton is bumped off, Cagney and Clarke board the Super Chief and head to California. With the cops laying for Cagney in LA, he's suspicious of everyone. A shifty-looking mug (William B. Davidson) takes after Cagney on the street; catching up to the winded Cagney, the mug explains that he's a movie director, and that Cagney is a perfect "type" for an upcoming prison picture. After several months as a bit player, Cagney befriends good-natured movie-star Margaret Lindsay, who encourages Cagney to seek out bigger parts. The enterprising Cagney engineers a phony fan-mail campaign encouraging the studio to give him starring roles. Though now a slick, pomaded romantic lead in pictures, Cagney is still Cagney; when a snooty critic pans Lindsay's most recent performance, Cagney forces the reviewer to literally eat his words! It must needs be that Cagney's old gang shows up in Hollywood, planning to use Cagney's influence to gain entree into movie stars' mansions, then steal their valuables. Cagney says ixnay to this, so the mob schemes to take him for a ride. Tipped off by Clarke, Cagney is able to rout the crooks, save the day, and claim Lindsay for his bride. Lady Killer is vintage Cagney, throwing virtually every one of his star-making attributes (including one cute reference to his legendary "grapefruit scene" in 1931's Public Enemy) into one entertaining 76-minute stew.

William B. Davidson
as Williams

George Blackwood
as The Escort

Dennis O'Keefe
as Man in casino