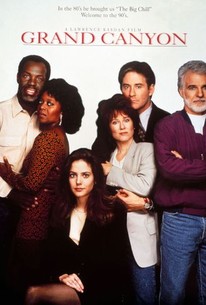 Director Lawrence Kasdan's Grand Canyon is a gathering of random events, uniting the film's wildly divergent protagonists. Driving home from an LA Lakers game, Mack (Kevin Kline), an immigration attorney, is stranded in an unsavory part of town when his car breaks down. He is rescued from a gang of hoods by Simon (Danny Glover), an African-American tow truck driver, inaugurating a friendship between these two men. Mack offers to repay Simon's kindness by helping his sister (Tina Lifford) find an apartment in a better neighborhood, and by arranging a blind date between Simon and Jane (Alfre Woodard), a friend of Mack's secretary Dee (Mary Louise Parker). Woven into this fabric are the tribulations of Mack's best friend, a pompous exploitation movie producer (Steve Martin), who is later wounded in a robbery similar to the one threatening Mack at the beginning of the film; of Mack's wife Claire (Mary McDonnell), who adopts an abandoned baby, and disenfranchised son Roberto (Jeremy Sisto); and of Simon's nephew (Patrick Malone), who is contemplating joining a street gang. The title is symbolic, referring to the class-imposed chasms which would normally separate the characters. Kasdan co-wrote the screenplay with his wife Meg.

Randle Mell
as The Alley Baron

Brett A. Jones
as Window-Breaking Thug