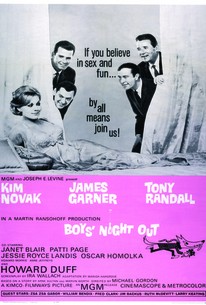 In this squeaky clean sex comedy (the sort that could only have been made in the early 1960s), Kathy (Kim Novak) is a sociology student preparing her doctoral thesis, "Adolescent Sexual Fantasies in the Adult Suburban Male." She poses as a call girl to gain perspective on the sexual attitudes and behaviors of contemporary men, and she is soon installed as a kept woman for four men, Fred (James Garner), George (Tony Randall), Doug (Howard Duff), and Howard (Howard Morris). Except for Fred, all the men are married and looking for some of that loose, swinging action they've been hearing about, which makes the situation a research gold mine for Kathy. But she quickly discovers that while the men can talk about sex, they're too inhibited to actually do anything about it; what they really want isn't a wild fling, but an understanding ear. Fred is the only one who makes any romantic overtures, and in time he asks for her hand in marriage. Janet Blair, Anne Jeffreys, and Patti Page plays the wives of the would-be white-collar lotharios, and Zsa Zsa Gabor plays their boss's girlfriend.

Critic Reviews for Boys' Night Out

Audience Reviews for Boys' Night Out

There are no featured audience reviews for Boys' Night Out at this time.