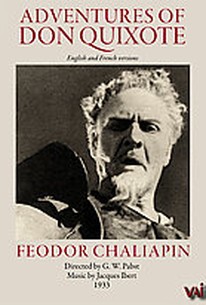 The French/British Don Quixote is a faithful rendition of the Cervantes novel, with a poignant ending added by director G.W. Pabst. Opera star Feodor Chaliapin stars as Cervantes' "Knight of the Woeful Countenance," an aged, addled Spanish gentleman so devoted to stories of long-ago chivalry that he decides to relive those bygone days. With his faithful squire, Sancho Panza (George Robey), Don Quixote rides off to tilt at windmills and to worship chubby milkmaid Dulcinea (Renée Valliers) as his lady fair. Sancho manages to save Quixote from killing himself, but cannot prevent the old gent from returning home utterly disillusioned. Director Pabst alters Cervantes' original ending by having the dispirited Quixote pass away as he watches his precious books on chivalry going up in flames. There are actually two versions of Don Quixote, one in English and one in French; the French-language version has a different supporting cast, but Pabst draws the same deep emotions and brilliant bits of business from both. Though the film unfailingly comes to life in front of an audience, Don Quixote is generally out of favor with devotees of G.W. Pabst, who consider the film a step down from his brilliant silent work. ~ Hal Erickson, Rovi

Miles Mander
as The Duke

Sidney Fox
as The Niece

Genica Anet
as Servant at Inn

There are no featured audience reviews for Adventures of Don Quixote at this time.