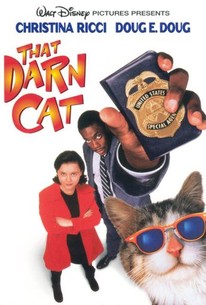 The original Disney feature film, That Darn Cat, was a feel-good hit in 1965, thanks largely to stars such as Hayley Mills, Roddy McDowall, and William Demarest. This 1996 remake also closely follows the novel Undercover Cat by Mildred Gordon and Gordon Gordon and features Christina Ricci in the Hayley Mills role. In a small Massachusetts town, two bumbling criminals mistakenly kidnap a maid, thinking her to be the wife of a prominent businessman. D.C., short for Darn Cat, is an alley cat who, while looking for his nightly snack, stumbles upon the kidnap victim, bound and gagged in a shed. The kidnap victim scratches a plea for help on the back of her wristwatch and puts it around the cat's neck. Patti (Ricci) finds the watch and links it to the missing maid. Playing amateur detective, she enlists the aid of an FBI agent, Zeke (Doug E. Doug), who has been assigned to the case. Patti and Zeke follow D.C. through tight openings to track down the captive. The cat also leads them to the woman's abductors (Peter Boyle and Rebecca Schull) and to a climactic car chase. ~ Michael Betzold, Rovi

Libby Whittemore
as Another Agent

Wilber T. Fitzgerald
as Scientist No. 1

Michelle B. Cooper
as Female Nurse

George Dzundza
as Boetticher
View All

News & Interviews for That Darn Cat

Critic Reviews for That Darn Cat

Audience Reviews for That Darn Cat