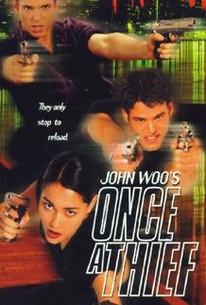 This two-hour pilot for the Canadian TV series is inspired by John Woo's 1991 Hong Kong film of the same title, but the story has been altered extensively. Mac (Ivan Sergei) and Li Ann (Sandrine Holt) are the foster children of a powerful crime boss. With their foster father's biological son Michael (Michael Wong), the three make up a trio of high-tech burglars. When Li Ann is forced to become engaged to Michael, she tries to escape with Mac, whom she really loves. On their way, they pull a failed heist on one of their adoptive father's warehouses. Mac goes to prison believing Li Ann is dead. Years later, he is released from prison by a covert law enforcement agency based in Vancouver and is pressed into using his skills for good. He discovers that Li Ann is a part of this agency, but so is her new fiancé Victor (Nicholas Lea). When they're assigned to stop a Hong Kong crime family that's taking over Vancouver, they realize they're going to meet with Michael once again. The fact that this thriller is actually a television program and not a feature is evident in its slightly lower production values; however, Woo proved with the original Once a Thief that he could make a thriller without much violence, and the 1996 edition still has the ability to entertain.

Jennifer Dale
as The Director

Robert Ito
as The Godfather