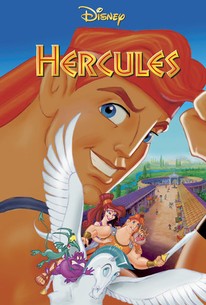 Fast-paced and packed with dozens of pop culture references, Hercules might not measure up with the true classics of the Disney pantheon, but it's still plenty of fun.

Disney's animation team dipped into the rich well of ancient mythology for this musical comedy. The son of Greek gods Zeus (voice of Rip Torn) and Hera (Samantha Eggar), Hercules (voice of Josh Keaton) is stolen as a boy by the minions of Hades (voice of James Woods), lord of the underworld. Forced to live among humans, Hercules is turned into a half-god and half-mortal after drinking a forbidden potion brewed by Hades' right hand men, Pain (voice of Bob Goldthwait) and Panic (voice of Matt Frewer). Now Hercules has the remarkable strength of a god, but is trapped in the body of a human, and before he learns how to use his power properly he goes through a typically adolescent awkward period. In order to become a god and return to his home on Mount Olympus, Hercules must prove himself a true hero on Earth. With the assistance of Philotes (voice of Danny De Vito), a plucky satyr known as "Phil," the grown-up Hercules (voice of Tate Donovan) learns to use his strength to his advantage and becomes a famous and benevolent protector of those around him, successfully battling a variety of gods and monsters. However, Hades, wanting to cut Hercules down to size, sends his secret weapon after him -- Megara (voice of Susan Egan), a seductively beautiful woman under Hades' control, who is to win Hercules' heart and render him helpless against the forces of the underworld. Acclaimed British cartoonist Gerald Scarfe served as production designer for this project, while Alan Menken wrote the musical score. Incidentally, for the Spanish language version of the film, Latin pop singer Ricky Martin provided the singing voice of Hercules, two years before he became a chart-topping sensation in America with his hit single "Livin' la Vida Loca."

Barbara Barrie
as Alcmene
View All