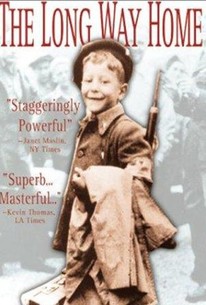 The struggles of European Jews during WWII have been well documented, but this film (produced with the cooperation of the Simon Weisenthal Center) makes it clear that the ordeal of those who suffered during the Holocaust did not end with the liberation of Europe. The Long Way Home uses interviews with Holocaust survivors, newsreel footage, and readings of letters, journals, and news reports, to tell the story of the hardships faced by those freed from concentration camps in 1945. Often riddled with disease, suffering from malnutrition, and remorseful over having survived while their loved ones perished, many survivors soon discovered that they no longer had homes to return to, and many European nations, struggling with their own post-war poverty, would not accept the refugees. Some found themselves in Displaced Persons camps, which were often only marginally better than the camps from which they had been freed, while others attempted to flee to Palestine, over the objections of the British government, who then held the territory as a colony. The establishment of the Zionist state of Israel was widely seen as the best solution to bring dignity, self-determination, and a homeland back to the refugees, but the notion was widely opposed at first, particularly by the British government. The Long Way Home is narrated by Morgan Freeman. Martin Landau, Edward Asner, Helen Slater, David Paymer, and Michael York contribute readings to the soundtrack.

There are no featured audience reviews for The Long Way Home at this time.