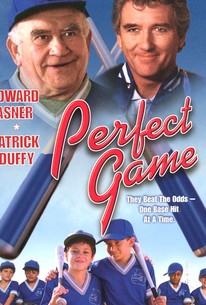 A group of youthful misfits learn the value of teamwork in this made-for-TV comedy-drama. Kanin (Cameron Finley) is a 11-year-old kid who loves baseball and wants to play on the local Little League team. But as much as he loves the game, Kanin isn't very good, and he figures he doesn't have much of a chance of making a place on the team coached by Bobby Geiser (Patrick Duffy), who has guided a number of league champions. Kanin is pleasantly surprised when he and a number of other less-than-stellar players make the cut, but they soon discover Geiser was forced to take them onto the team after losing a bet -- and that he'll see to it that they ride the pine all season. Kanin and his friends are outraged, and so is Diane (Tracy Nelson), Kanin's mom; with her help, Kanin and his friends oust Geiser as coach, and a retired high school baseball coach (Edward Asner) is brought in to replace him. However, the kids soon discover that their new coach needs a dose of confidence nearly as badly as they do. Perfect Game was produced for the Disney Channel, where it originally aired.

There are no critic reviews yet for Perfect Game. Keep checking Rotten Tomatoes for updates!

There are no featured audience reviews for Perfect Game at this time.