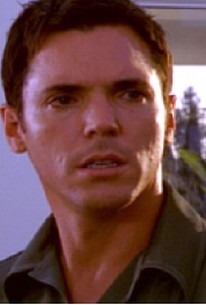 Fun-loving movie producer Dustin (Nicholas Lea) wakes up on a beach near Los Angeles after a champagne-flavored night on the town with a woman he met that night. But she's further down the shore, and as the spooky stranger who awakens Dustin points out, she's dead. Very dead. The stranger, Minnow (Holt McCallany), says he witnessed Dustin bonk the girl with a bottle and kill her, although Dustin can't remember any of it. And Minnow says he won't tell the cops if Dustin will lay a little cheddar on him to keep him tidy, if you know what he means. Dustin's only too happy to give Minnow money, but when Minnow shows up at his door ready to move in, Dustin finds himself helpless to say no. Minnow cuts his hair, puts on Dustin's clothes, becomes his self-appointed partner, puts together a TV show starring the hottest actress around, has an affair with Dustin's disgruntled girlfriend Darcy (Kari Wuhrer), crashes Dustin's hot car in a hit-and-run accident, and in general makes a mess out of Dustin's previously orderly life. But then the dead girl turns up -- and she's not so dead after all.

There are no critic reviews yet for Kiss Tomorrow Goodbye. Keep checking Rotten Tomatoes for updates!

There are no featured audience reviews for Kiss Tomorrow Goodbye at this time.