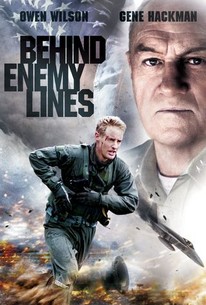 The plot for Behind Enemy Lines is more jingoistic than credible, and the overload of flashy visual tricks makes the action sequences resemble a video game.

A television commercial for a Sega game system that aired during the 1999 MTV Music Video Awards landed debut director John Moore a gig behind the camera of this military action thriller. Owen Wilson stars as Lt. Chris Burnett, a naval aviator aboard the U.S.S. Carl Vinson who's frustrated with the strict "hands-off" political policies that prevent him from experiencing combat against hostile Bosnian forces in his F/A-18 Superhornet jet. Burnett's commander, Admiral Reigert (Gene Hackman), thinks that the brash pilot doesn't have what it takes to be in the millitary, but the eager young officer soon gets the chance to prove his mettle. While conducting a routine photographic reconnaissance over a remote area of the Balkans, Burnett captures grisly images that serve as proof of genocidal crimes, but his plane is blown out of the sky. He's soon pursued on the ground by the forces of Lokar (Olek Krupa), a Serbian paramilitary leader intent on covering up unthinkable crimes, while Reigert defies the NATO orders of his superior (Joaquim de Almeida) and risks his career to mount a covert rescue mission. Behind Enemy Lines (2001), the first of two back-to-back releases starring Wilson and Hackman (the other being The Royal Tenenbaums), also stars David Keith, Gabriel Macht, and Charles Malik Whitfield. ~ Karl Williams, Rovi

Aernout Van Lynden
as Himself

Ivan Urbanek
as Father in Minefield

Kamil Mikulcik
as Tiger No. 1

Dorothy Lucey
as Herself

Gregory B. Goossen
as CIA Spook

Robert Franko
as Tiger No. 2

Lukas Hoffman
as Tiger No. 3

News & Interviews for Behind Enemy Lines

Critic Reviews for Behind Enemy Lines

Audience Reviews for Behind Enemy Lines