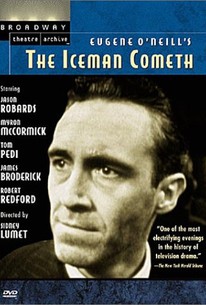 Jason Robards burst onto the Broadway scene in 1956 with his performance in Eugene O'Neill's devastating Iceman Cometh, playing the central role of Hickey, a salesman who comes to a rundown bar on a mission to bring peace to its boozing denizens by lifting their illusions--only to wreak disaster on them and himself. Four years later, director Sidney Lumet (later to direct such classics as Dog Day Afternoon and Network) made this skillful television version of the play, bringing back Robards, along with a sterling collection of character actors (particularly Myron McCormick as a former communist who comes to see his reasonableness as a form of cowardice) and a young Robert Redford (in a strikingly unheroic role). Robards became famous for his roles in many O'Neill plays; his galvanizing performance drives The Iceman Cometh and makes this production one of the landmarks of television drama. --Bret Fetzer

There are no featured audience reviews for Eugene O'Neill's The Iceman Cometh at this time.