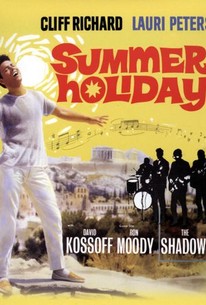 This was the first feature-length film for successful British director Peter Yates and it was also a winner, in part, because its star Cliff Richard was Britain's hottest rock 'n roll property in the early '60s. The title song, in fact, climbed to No. 1 in the charts in Britain. The tale centers around Don (Richard) and his two friends as they take off in a double-decker London bus to travel around Europe and see the sights. Along the way from France to Greece they manage to give rides to a variety of interesting people -- especially a few young women. They come across an itinerant troupe of entertainers and a young boy, who actually turns out to be a young woman hiding from her overbearing mother and her agent. Both the mother and the agent threaten to turn the "bus ride" into a disaster, yet the spirit of the young men and women overcome all obstacles, to the tune of several major production numbers. Cliff Richard had a "Sir" prefixed to his name in 1995, after many years of charity work.

Nicholas Phipps
as Wrightmore
View All