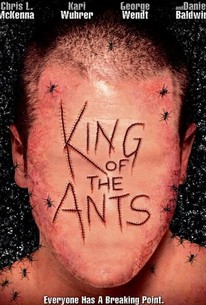 King of the Ants

Touted as something of a return-to-form for Re-Animator director Stuart Gordon, King of the Ants offers the brutal tale of a man discovering his previously untapped potential for violence. Despite the fact that his future seems relatively undefined, young drifter Sean Crawley (Chris McKenna) is an easygoing guy who makes a meager living by painting houses. When electrician Duke Wayne (George Wendt) suggests that the naïve young painter could make more money if he could expand his horizons, an eager Sean takes him up on the offer and Duke introduces Sean to local construction magnate Ray Mathews (Daniel Baldwin). Ray quickly enlists Sean's assistance in trailing a local city accountant whose number crunching is beginning to make the crooked construction heavy uncomfortable, and it's not long before Ray asks Sean to carry out a hit on the overzealous accountant. Although Ray and Duke subsequently attempt to distance themselves from the crime, Sean's attempt to collect on the hit results in a brutal attempt on the amateur hit man's life. Though he is beaten to within inches of death, Sean makes an unexpectedly speedy recovery fueled by an unquenchable thirst for revenge.

Critic Reviews for King of the Ants

There are no critic reviews yet for King of the Ants. Keep checking Rotten Tomatoes for updates!

Audience Reviews for King of the Ants

There are no featured audience reviews for King of the Ants at this time.

King of the Ants Quotes