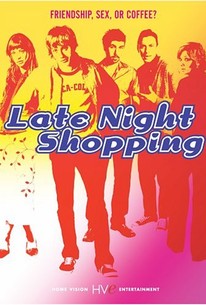 Four friends compare notes on their romantic problems -- which in time become quite interesting indeed -- in this sharp comedy from Great Britain. Sean (Luke De Woolfson), Lenny (Enzo Cilenti), Vincent (James Lance), and Jody (Kate Ashfield) are four pals who meet every evening for dinner at the same neighborhood restaurant. Sean works the night shift at a hospital, and one night he makes a date with Susie (Sienna Guillory), a woman who is visiting her unconscious boyfriend; Sean soon discovers the woman's sexual appetite exceeds his own, and they can't get out of the hospital before taking things to the horizontal level. Lenny is a directory assistance operator for the telephone company and is infatuated with one of his co-workers, Gail (Shauna MacDonald), though his attempts to set up a date end in disaster. Vincent, a supermarket stock clerk, is a notorious womanizer who has a personal policy of never sleeping with the same woman more than three times. And Jody works in computer assembly and offers sarcastic advice to her three mates, especially Sean, whose problems with women she finds especially amusing. Vincent makes the acquaintance of a lonely woman from abroad named Madeline Zozzocolovich (Heike Makatash), and romance soon rears its head, but after Vincent informs her of his three-strikes-and-you're-out rule, Madeline is crushed and disappears, and soon the foursome are scouring a small resort community, hoping to find her before she tries something drastic. Late Night Shopping was the first feature from director Saul Metzstein and screenwriter Jack Lothian; the film won the C.I.C.A.E. Award at the 2001 Berlin Film Festival. ~ Mark Deming, Rovi

There are no featured audience reviews for Late Night Shopping at this time.