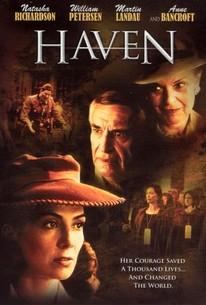 An American journalist takes on the dangerous responsibility of rescuing nearly a thousand refugees from a Nazi concentration camp in this two-part made-for-TV movie based on a true story. In the early days of America's involvement in World War II, Ruth Gruber (Natasha Richardson) is a reporter who has been giving particular attention to a recent story: President Franklin D. Roosevelt, in violation of United States policies of the day, has announced he will grant asylum in America to 982 European refugees from Nazi labor camps. But someone needs to escort the prisoners to the U.S.; Gruber, of European ancestry and Jewish faith, volunteers for the assignment over the objections of her parents (Anne Bancroft and Martin Landau). Gruber travels to Italy on behalf of Secretary of the Interior Harold Ickes (Hal Holbrook), where she helps the refugees board the U.S.S. Henry Gibbins. But Gruber discovers that the American sailors manning the ship regard their passengers as little better than their Nazi jailers, and the State Department declares, upon their arrival in the United States, that all the refugees are to be housed in a camp in Oswego, NY -- even those who have families willing to sponsor them in America. Gruber realizes her work with the refugees is far from done, and she bravely battles against both bureaucracy and prejudice to win both dignity and fair treatment for the new settlers. Haven was originally broadcast on the CBS television network on February 11 and 14, 2001.

There are no featured audience reviews for Haven at this time.