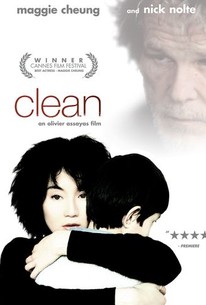 In one of her best roles, Cheung gives a believable and arresting performance as a recovering addict.

A woman throws herself into a last-ditch struggle to conquer her demons in this gritty drama from director Olivier Assayas. Lee Hauser (James Johnston) is a faded rock star who lives with his wife, Emily Wang (Maggie Cheung), the former host of a European music video show, in a small town in Western Canada. Both Lee and Emily have been battling drug addiction for years, and when Lee finally dies of an OD, Emily finds herself charged with possession of heroin and ends up spending six months in jail. Lee and Emily's son, Jay (James Dennis), has been living with his paternal grandparents, Albrecht (Nick Nolte) and Rosemary (Martha Henry), and while Emily is eager to see her son after getting out of jail, Albrecht persuades her that she needs to get herself clean before she can reconnect with Jay. Determined to get off methadone, Emily relocates to France, where she scares up a job as a waitress and moves in with her old friend Elena (Béatrice Dalle). Emily's attempts to start a new career and stay off drugs prove to be an uphill battle, and she doesn't appear to be winning her fight when she learns that Albrecht and Jay will be accompanying Rosemary to London for medical treatment when Rosemary contracts a serious illness -- and that Albrecht is considering making a side trip to Paris. Clean was screened in competition at the 2004 Cannes Film Festival.