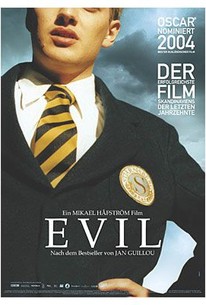 Evil's attempts to unpack the causes and effects of violence aren't always successful, but the well-acted end result still has an unsettling impact.

Erik is a 16-year-old boy whose life has been plagued by violence. Tormented by his abusive stepfather, he has hit back in the only way he knows -- by giving a good thrashing to anyone in his way. When he is expelled from public school, Erik is told he has one last chance to make something of himself and is sent to a prestigious private school. This time, he is determined not to mess up. Initially, Erik is overjoyed to escape his unhappy home, but he soon discovers he has merely substituted one prison for another. The school is run by a rigorous and unjust code, enforced by senior students rather than the faculty. In fact, the teachers prefer to ignore what goes on among the students, including beatings and a wide variety of humiliating rites. Soon, Erik is faced with a dangerous choice: confront his oppressors and risk expulsion, ignore them and suffer humiliation, or let his friends suffer for him.

Exclusive: Mikael Håfström steps into 1408 with RT.
Cusack Checks In to King’s "1408"
View All