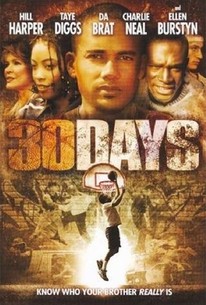 At the outset of this earnest drama, an innocent basketball game regresses into an ugly brawl, which in turn leads to the arrest of two of the participants. Black inner city teen Donnell (Hill Harper) and affluent white suburbanite Jason (Charlie Neal) get sentenced to thirty days of labor in each others' communities. Donnell goes to work for an Irish-American landscaper (Academy Award winner Ellen Burstyn) who teaches him that discrimination can assume many forms; meanwhile, Jason goes to work in Jo Jo's (Roscoe Orman) soul food restaurant, where he learns to be more diligent and begins to grasp the danger of judging someone based on appearance or income. When the boys return to their homes, each one struggles to put into practice what he has learned: Jason must steer clear of his gang-connected brother, Jamal Boy (Taye Diggs), while Jason is disgusted with the spoiled and insensitive attitudes of his family and friends. Eventually, unforeseen tragedy creates a bond between longtime enemies Jason and Donnell, and forces them to focus on teamwork and shared goals.

A. Rahman Yoba
as Blood

There are no critic reviews yet for 30 Days. Keep checking Rotten Tomatoes for updates!

There are no featured audience reviews for 30 Days at this time.