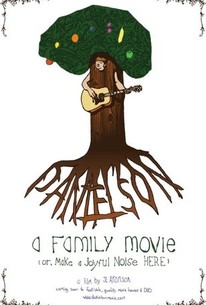 Filmmaker J.L. Aronson offers an intimate portrait of a band in which eccentric innovation and unwavering faith forms an unlikely recipe for indie-rock stardom. The year was 1995, and aspiring musician Daniel Smith needed a project for his senior thesis project at Rutgers University. Upon handing in an album recorded by the Danielson Famile entitled A Prayer for Every Hour, the ambitious student was promptly given an A for his remarkable creative efforts. The youngest sibling in the Smith family was 11 years old, and a new era in family history had been set into motion. Born and bred in the farmlands of New Jersey, Smith and his siblings formed a band that soon took to performing in vintage white nurses' outfits to symbolize the healing power of the "Good Word." Though unfavorably received by the Christian community, the Danielson Famile found an unlikely ally in the form of the independent music community. With an outsider edge that appealed to music critics who were fast beginning to grow tired of the stagnant state of modern music, Smith and his band received widespread recognition thanks to articles in such prolific publications as Rolling Stone and Spin magazines. With little money coming in and his other siblings longing to continue their education and seek out their own paths in life, Danielson Famile frontman Smith does his best to establish himself as a solo act while mentoring a then-unknown singer/songwriter with the curious name of Sufjan Stevens.

There are no featured audience reviews for Danielson: A Family Movie at this time.