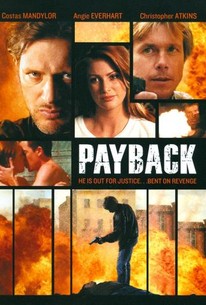 Costas Mandylor, Angie Everhart, and Christopher Atkins headline this thriller about a traumatized big city cop who moves his family to the country in hopes of forgetting his violent past, only to be targeted for death by the same psychopath responsible for killing his partner. After seeing his partner murdered during a drug bust gone awry, Sean was certain that his fellow officers would do everything in their power to ensure that justice was served. When internal politics within the police force threaten to prevent this from happening, a dejected Sean makes the decision to leave the city behind and move his wife and daughter to a modest ranch in the country. Meanwhile, the maniac who murdered Sean's partner stages a daring escape from prison, and he's determined to take out the man responsible for putting him there in the first place. Out in the country, Sean and his family are sitting ducks. As the killer closes in, Sean finds himself reluctantly dragged back into the violent world he had once tried so hard to escape. But this time the odds are greater than ever before, leaving Sean with no choice but to take drastic action for the sake of his frightened family.

There are no critic reviews yet for Payback. Keep checking Rotten Tomatoes for updates!