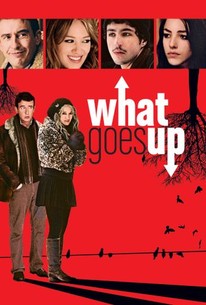 What Goes Up squanders the charisma of Steve Coogan with a lazy screenplay, contrived plotting, and overall poor production.

What Goes Up Ratings & Reviews Explanation

What Goes Up Photos

A period comedy set in the 1980s, Jonathan Glatzer's What Goes Up tells the poignant story of a morally challenged New York reporter who connects with a group of high school outcasts while in New Hampshire covering the story of Christa McAuliffe, the first civilian astronaut. Arriving in McAullife's hometown, reporter Campbell Babbitt (Steve Coogan) is distraught to learn that an old college friend has recently committed suicide. Meanwhile, as Babbitt attempts to craft an unsung hero story about his old friend by gravitating toward the teacher's misfit students, local teacher (Molly Shannon) scrambles to cover up a looming scandal. When Babbitt discovers that the motley crew of teens is comprised of a self-absorbed seductress (Hilary Duff), a timid voyeur (Josh Peck), and a manipulative pregnant teen (Olivia Thirlby), he becomes obsessed with our need to create heroes where none exist. Over time, the roles are reversed and Babbitt learns that the traits he is currently projecting onto his fallen friend's students may in fact be traits possessed by he and other adults. Increasingly at ease around the students as he relates to them on their own terms, Babbitt gradually begins to form a fixation on the very student rumored to have had an affair with his deceased friend.

News & Interviews for What Goes Up

Critics Consensus: Up And Drag Me to Hell Are Certified Fresh
View All

Critic Reviews for What Goes Up

Audience Reviews for What Goes Up

What Goes Up Quotes