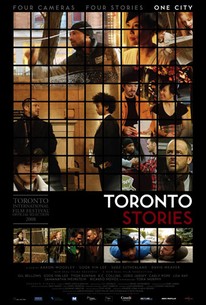 A taciturn young boy slips off a plane at Pearson and glides by customs agents, effectively forming the connective tissue for this journey through the city of Toronto as he makes his way through a city that still seems decidedly uncertain of its own identity. Aaron Woodley's "Shoelaces" gets things off to a poetic start by telling the tale of two kids who are emboldened to take a late night tour of the Don Valley after dodging a local bully. The second tale, an anti-romance directed by Sook-Yin Lee and entitled "The Brazilian," paints Toronto as a city where it's difficult to make connections, and nearly impossible to sustain them. Things begin to get gritty as a man named Elton attempts to turn over a new leaf while finding that the past isn't easily forgotten in Sudz Sutherland's "Window," and draw to a close in David Weaver's "Lost Boys," a brooding drama that finds an unstable, drug-addicted vagrant pondering how he can be of any help when he spies a suspicious character abducting the wandering boy from the beginning of the film.

Toka Murphy
as The Boy

Lisa Ray
as Beth
View All

There are no featured audience reviews for Toronto Stories at this time.